Tomoko Nomura (野村 朋子, Nomura Tomoko) is a student of the Holy Forest Academy and attends Class 3-4 who initially appears messing up (accidentally) one of Miyabi Aizawa's plans to get Eikichi Onizuka fired, which leads her to be kicked out from Miyabi's clique.

Tomoko also knows about the tragic explosion incident done by Urumi Kanzaki in their elementary school years this is due to Ms. Fujimori angrily exposes Urumi's secret to her classmates. She is also seen with Kikuchi and Murai when Onizuka tries to find Azusa Fuyutsuki.

In Episode 27 and 28, Tomoko enters the Glossy Princess Contest done by the MGCP to make her in the Weekly Shonen Magazine. However her winning was soon disrupted when fellow model and actress Megumi Hoshino and the group from Warning Productions are behind the cheating scheme such as stealing her bathing suit for the photo shoot, exposing the address to the Nomura's residence, and lastly, some postcards are written by Onizuka, her manager and all others to vote Tomoko but the name Megumi Hoshino was written on the back. The audience and most people hate Megumi for her cheat once they find out her manager and the production company are behind the cheating scheme and they call her a fraud. But they know Tomoko is the real winner of the contest as all the audience who watch the contest walks away when Megumi is about to speak about her cheat win and they go to Tomoko's residence to support Tomoko.

Tomoko is last seen with her manager, who rounded up the media to expose the Ministry of Education group about the conspiracy between their former homeroom teacher and Miyabi's late best friend, Mizuki.

A side-story in the manga features Tomoko and her manager, also called GTO, only it stands for Great Tomoko Oppai (Oppai meaning breasts). In it, Tomoko's manager embarks on one very madcap adventure to save her from her dubious producers. 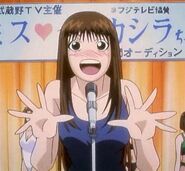 Tomoko in swimsuit at the beauty contest

Tomoko in a sexy dress

Tomoko while working in an advertising spot

Tomoko in a kimono 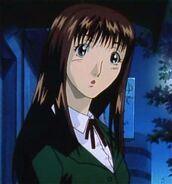 Tomoko in her school uniform

Tomoko and her doll x Zaku II, as seen in Great Tomoko Oppai. 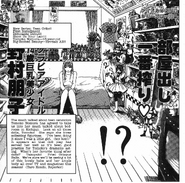 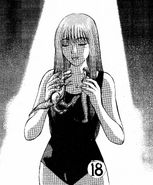 Tomoko at the beauty pageant, playing with her dolls