Noboru is a student of the Holy Forest Academy belonging to the infamous Class 3-4.

Yoshikawa is somewhat sluggish and weak having no muscle or whatsoever. He is a bit short for his actual age which makes him also appear younger than he actually is, this was noted even by Anko's "friend" (Rika Morishita) Boyfriend, Mah. Throughout the series Noboru hangs around with a quite untidy bowl cut haircut style, his hairs are black while his eyes are brown shaded. He usually looks as if he's half asleep, though this changes sometime during the manga.

Noboru had quite a rough past as he was bullied multiple times due to his weakness, in fact apparently he is so weak that even he himself tells Onizuka that he wouldn't be able of fighting girls such as Anko. He got repeatedly beaten by Anko and her two friends (Izumi Naoko and Asano Mayuko), until his whole body was covered with sore spots and bruises, on addition to this they would even draw and write comments over his body and most notably his genitals with permanent black markers.

Noboru is a quite introverted person as he tends to keep his feelings for himself. Shortly after he gets to know Onizuka and starts to place his trust on him, he gets bullied one more time by Anko and her friends, this caused him great frustration, so much that he even tried to commit suicide a second time by jumping off the roof of the school. Only when Onizuka directly asked him what happened he explained his situation, nevertheless, as he demonstrated Anko he is very brave, it is implied that meeting Onizuka and tagging along with him allowed Noboru to gain the confidence he was missing and finally stand up as a man.

When Anko fell off the Cliff into the sea he jumped in without thinking twice over it and dragged her unconscious body through sheer willpower to the surface. For all the time that the two of them stayed inside the cave he gave Anko words of comfort and search by himself for a hidden escape route until he found it. It is to note that he did not show any sign of fear throughout their performance in the cave that could have lead to their death any minute then.

He is very skilled when it comes to games, and that does not include only videogames but any types of games. He is resourceful, demonstrated by his building of impromptu bottle rocket launchers and outmanoeuvring even Kikuchi and Urumi in a game of paintball.[1] He was able of winning any prize that Anko wanted during the Kitamachi Shrine summer festival while effortlessly defeating any challenge thrown at him by Rinka's boyfriend, Mah.

He is also a very loyal friend as he demonstrated when Onizuka was an inch from being fired. In order to save him from resignation he undressed in front of a massive crowd and provided the evidence, which was needed as proof of his bullying by Anko and her friends. In addition to this, when Eikichi desperately needed money he readily sold all of his gaming software and the earnings that he profited from them. In addition he offered all of his life savings to Onizuka, although he promptly rejected the money.

He shares a very strong friendship with Onizuka as he was the one that gave him enough courage to rebel to the atrocities to which he was subjected to.

He and Kikuchi seem to have been friends for quite a long time, though it's unknown why.

Anko and her two friends used to bully him non stop. It is to be noted that she did so due to having been treated similarly poorly by her brother in the past. Later in episode 41 of the anime Anko admits that she is in love with Yoshikawa.

They eventually go on a date.[2] 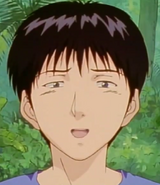 Noboru in the Live-Action series