Nao Kadena (嘉手納 南風 Kadena Nao) is a character from the series Shonan Junai Gumi, the prequel of GTO. In the anime she replaces the character of Naoko Moritaka in the role of the school's nurse.

Nao has long straight beautiful light dark hair, and she is at least 178 cm in height, she is slightly taller than Eikichi Onizuka. She is really attractive and has a great athletic looking body. She has red earrings and bright red lipstick most of her appearance.

She has a tattoo of the Pieta on her back, leading some students to think she is affiliated with the yakuza.[1]

In Shonan Junai Gumi, she is introduced as an attractive neighbor living a few doors down from Ryuji Danma and Eikichi Onizuka at the dilapidated Chateau de Riverside apartment building. The boys try to peep on her through a hole in the wall, but end up spying on a drag queen instead. Nao reveals the truth, and says they deserve it for peeping. A few days later, she asks Ryuji for a ride to Tsujido on his motorcycle. He revs the bike when they arrive at the school, the jerking motion making her boobs hit his back. Mariko Izumo comes out and recognizes her.

Nao announces she will be taking over as Class 1-F's homeroom teacher and teaching every subject. She uses her voluptuous body to motivate the boys to study, offering sex to anyone who can get a perfect score on a kanji test (the highest scorer, Saegusa, only gets a 75, and earns a "boob sandwich" for his effort).[1]

The female students get jealous of her, and Shinomi slashes open her clothing with a razor blade, revealing her back tattoo. Nao asks them to meet her in the gym later, and they worry that she will sell them to the yakuza. It turns out she invited some attractive young men who were former students of hers and went on to prestigious universities. She offers for them to tutor the girls, who now study as hard as the boys, to get into the universities that have the hottest guys.

She tries to help set Shinomi up with Eikichi via an elaborate plan involving a bikini, a cell phone, a TV, and Shinomi hiding in a box, but the box is accidentally shipped to someone with a similar name rather than to Onizuka.[2]

In the past she was known as the "Queen of Hakosuka", and used to win illegal racing which she left once her brother had a near fatal accident. Since her brother needed an expensive surgery operation, without which he could die at any time she decided to become Seirin's nurse in order to earn the money.

With her need for money she doesn't hesitate to sell items at a discount to the students and teachers.

After getting enough money she gives it to an American doctor who tricks her and runs away with the money after revealing in the news for his illegal act. Due to that experience she decides to leave the job as nurse but changes her mind after having challenged Eikichi Onizuka to a race and after Takashi Kadena decides to earn the money himself. She is also the one who convinces Hiroshi Uchiyamada to keep her as a school nurse.

She appears to be mature and well aware of the "power" she has on men.

Nao gets along with Azusa Fuyutsuki, trying to make her mature as a woman and  helping her with advice in women's matters and love things.

Nao is last seen along with other teachers including the director Ryoko Sakurai against a group of Ministry of Education who involves the conspiracy between Nanako Mizuki and Mr. Saito. 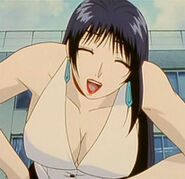 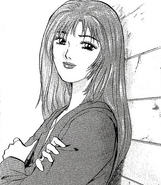