Murai, just like Onizuka, has dyed his hair blond but it was lighter although Kunio has a "brush cut". Kunio's hair natural color is black, this is shown in a photo held between his mother's hands, the photo portrayed Kunio while he was still a toddler and a flashback between him and Fuyumi Kujirakawa when she was bullied by men because of her height during his sophomore year in Holy Forest Academy. He ranks in at an average height.

Kunio is the son of a single parent, Julia Murai, meaning that he lacks of a father. She was impregnated by her boyfriend at the age of 13, however when he found out that she was pregnant with his child, he brusquely ended their relationship. Eventually, even her parents started to refuse acknowledging her, which forced Julia to abandon the house and raise Kunio all by herself in a single room flat. Due to the hardship that his mother had to go through, Murai assumed an overprotective character towards his mother, not wanting another man to hurt her feelings.

Since then, Kunio has not been to trust men getting close to his mother, under the belief that they would all try to enter a romantic relationship with his mother (who is very attractive). Onizuka is one of those men, which is the reason why he tried his best to stop Onizuka from befriending her. Murai adopts a aggressive manner towards Onizuka whenever he involves his mother. He often fantasizes about Onizuka becoming his stepfather, much to his horror, whenever his mother is with him.

However since Episode 7 and onwards, Murai was disciplined physically by his mother, Julia when he angrily talks back at her thinking about someone like Onizuka will be attracted to her, being lose in the game of love and marrying someone to be with.

Kunio is quite violent and loses his temper very quickly, especially towards Onizuka who continuously taunts him by being with his mother. He's concerned of the way his mother dresses, to the point where he even forces her to change her clothes were they too "eye-catching". He fears that she'll catch the attention of men (ex: Onizuka) who give her lusty looks. For these reasons, Onizuka provokes him whenever he has the chance and states that he has a mother complex.

Although he constantly brags about the fact that he is no more a kid, Kunio can act extremely childish, especially if Onizuka is involved. He is not very bright as a student; in the anime version, he openly admits that usually his exam score placed him somewhere below the top 200 scorers. However when fuelled by the possibility of going out with their school nurse, he was able to place himself in the 167th position.

He later on however befriends Onizuka after the latter gives him a lesson about life and convinces him to buggy jump off a bridge, however instead of an elastic rope what he used was a string made of tape. Kunio is a very proud person and does not back off from a one on one fight, instead firmly holding his ground, even when the adversary is stronger, taller and more experienced than he is.

Kunio is extremely unlucky when it comes to girls, both in the manga and anime as well as very shy in addition to the fact that he himself does not know his own feelings. In the Manga...

At first, along his two best mates, Fujiyoshi and Kusano, he helped Miyabi as well as he could in order to get their new eccentric homeroom teacher fired. However Onizuka messes up his plans, and in one way or another, he manages to get close enough to Murai to show him what it really means to be a responsible man. Kunio understands that he was wrong and that his behaviour was not the one of a real man, therefore in order to prove Eikichi that he understood he takes on his challenge, he bunjee-jumped off the bridge they were standing on.

He ends up by trusting Onizuka, to the point of turning to his side and eventually aid him against the threats that Miyabi would send Onizuka. The two of them form a very strong bond, though however rather than true friendship, Onizuka seems to view it also as the kind of relationship that takes place between a master and his slave. Kunio however, knows this and being unable to refuse abiding to Onizuka's pleas, and does not miss a chance of getting revenge and play a prank on him.

Kunio befriends Fuyumi in his sophomore years when he protects her from getting bullied by men because of her height but he ends up being beaten down instead. In Episode 20, Fuyumi is now the team captain of the basketball team and Kunio is unaware of her having a crush on him ever since he protects her from getting bullied as well as the love letter he found on his locker with the name "F" on the envelope as he mistakes this letter belongs to Akane Fujita. When his mother Julia tells him that he loses the game of love after beating his teacher Eikichi physically and being drowned in the lagoon when Eikichi's boat bumps on his head when Fuyumi tries to save him, he realizes that the love letter belongs to Fuyumi and not Akane's as he was last seen chasing the bus where Fuyumi had rode off until he becomes saddened when he slipped on the road and watching the bus riding away.

He is the only son of Julia, and so far he seems to have no other relatives.

He is very attached to his mother who however is prone to show him some tough love every time and then. More than once, Murai is seen taking care of his mother, proving that occasionally he can show a mature behavior as well, although only to some extent. In the anime Kunio stated that he would not mind if his mother tried to remarry (in the manga he never said such), however he implies that he would be very selective about choosing his next father. Nevertheless, he then hopes that the day never comes. Kunio is always disciplined physically by his mother whenever he angrily talks back at her or some men whether is old or young men tries to make a pass at her or being married.

A young Julia Murai and Kunio 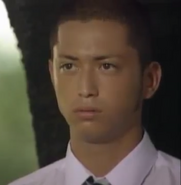