Julia Murai (村井 樹里亜, Murai Juria) is the mother of Kunio Murai, whom she had at 13, a very young age. Julia didn't even know she was pregnant with him until six months had passed. She faced her parents' disapproval when she was determined to have him; after Kunio's birth, her parents cut all ties, and she came to Tokyo to raise him and to find work.

Now she's a construction worker who often times doesn't wear a bra while wearing very tight, restricting clothing. Murai is very protective of his mother, and is determined to not let creepy guys hit on her and is willing to beat up on anyone who looks at her funny (for example: his own friends Tadaaki Kusano and Kouji Fujiyoshi) and tries to make the moves on her (especially including Eikichi Onizuka who really likes her). Some people may also think that Kunio has a 'Oedipus Complex,' where he has the hots for his own mother.

Onizuka decided to meet Mrs. Murai after getting some info from Kikuchi and Yoshikawa.
In both versions (anime and manga), Onizuka got a kick to the crotch as a misunderstanding. And then they started to get friendly.

Mrs. Murai gets a bit more screentime in the anime version than the manga version.

Julia Murai also has a chance to meet Fuyumi Kujirakawa only in the anime.

In the 1998 live-action, Julia's name is changed to Tsubasa, and she is 34 rather than 27 (having had Kunio at 17). Also, Kunio's father was a biker who died in a motorcycle accident. Tsubasa drives a dekotora (Japanese decorated truck). 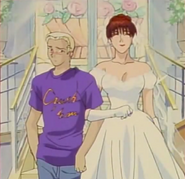 Julia in the manga 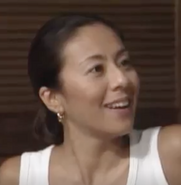