She is one of the teachers in the Holy Forest Academy. She was born in Tokyo.

Azusa is a beautiful young woman with pale skin, neck-length brown hair, and brown eyes. She is self-conscious about the size of her breasts.[1]

Azusa is a responsible woman who may initially seem shy, quiet, and perfectly ordinary, but, as the story progresses. It's revealed she can be determined and bold (even though clearly not to Onizuka's level) if she feels she is defending something important. There were times when she even put her job at stake to help Onizuka, slowly showing his influence in her. Her moral is high, and she admires Onizuka because he acts on his beliefs and stands his ground even when the circumstances are against him. She envies how much fun he has as a teacher since she didn't have confidence in her teaching until he assured her she had taught something important even to him. Fuyutsuki takes great pride in her role as a teacher, placing great emphasis on being a teacher to educate and not to get a paycheck.

She has difficulty with the female students in her class due to all the boys in her class having crushes on her but brings them around fairly quickly after Onizuka's advice.

Fuyutsuki was inspired to become a teacher by her high school teacher, Saito.

Azusa is a co-worker of Eikichi Onizuka's and a supportive friend of his. She eventually develops romantic feelings towards him as she worries about him throughout the series whenever he gets in serious trouble, aware of his recklessness. Quite differently from our hero, Azusa graduated from one of Tokyo's best universities, Waseda, with a degree in Literature.[2] Her field of teaching is Kokugo or the Japanese language.

Azusa has a younger sister named Makoto Fuyutsuki, who is in high school at the time of her debut. She happens to be radically different from her older sister, as she happens to have some expertise in martial arts. She's also obsessed with detective investigations and is good with technological devices. 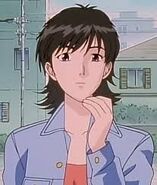 Fuyutsuki and Onizuka in the Anime

Azusa Fuyutsuki in a swimsuit

Azusa Fuyutsuki in a bikini

Fuyutsuki And Other Female Teachers 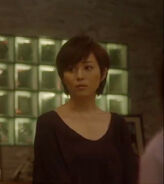