Anko Uehara (上原 杏子, Uehara Anko) is a student of Holy Forest Academy and its Class 3-4.

Anko has long straight brown hair that is usually tied up in unplaited pigtails by red hair ties while falling down to her shoulders with bangs hanging on either side, brown eyes and her height is normal like all girls her age shown.

Anko is the classic case of the "spoiled brat" having been brought up in a high class family. She does not mind making other people suffer if it allows her to reach her goal, as showed when she bullied Noboru Yoshikawa in order to stop him from getting any closer to Onizuka or aid him. She is quite the confident girls and states that she is for the wild type, such as Brad Pitt, which is the opposite of Noboru. However she is still a girl and when offended deeply she is prone to cry as showed when Onizuka wrote on her butt.

However in later episodes, Anko remains cold to their teacher and during their trip in Okinawa she still maintains her hostility towards Yoshikawa until he saves her from getting drowned. Anko gains a crush towards Yoshikawa after he saves her from getting drowned even being tape recorded by Kunio and her friends in disguise when a disguised Onizuka threatened her which makes her admit she loves Yoshikawa. When Onizuka and the others reveal themselves, Anko's cheeks became rosier and blushes entirely in embarrassment because of her feelings to Yoshikawa after being tape recorded by them.

However as the manga progresses Anko seems to drop this kind of attitude, especially when Noboru is around which causes her to feel embarrassed and makes her face go red, this allowed her to show her sensitive as well as insecure side as she tried countless times to reveal Noboru the way she feels about him being scared of being rejected by him.

Anko is the daughter of the PTA president (a notorious Parent Teacher Association). She is not the only child, she also has an older brother although nothing much about him has been revealed apart from his name, Yuichi Uehara.

Her hatred towards weak boys or the imaginary wall that usually separates her from a guy was caused by the injustices she suffered at her older brother's hand. At that time, Anko was a very young child, probably around 5 years, while her brother around 9/10 years old. Her brother did not seem to care very much of the age difference or the fact that she was her younger sister, instead this seemed to fuel him more in his childish hatred that he made Anko go through. He went as far as destroying Anko's doll although she had not done anything to deserve such treatment, this really made her wonder if her brother hated her.

In the present day, Anko demonstrates her hatred towards weak boys when she bullies Noboru Yoshikawa physically twice along with her two friends which results in the latter attempting suicide by falling into the school building but Eikichi Onizuka their new teacher is the one who rescues him from falling off the building but at the cost of Uchiyamada's car which it was wrecked twice. Onizuka also punishes Anko and her friends inside the video bar for what they have done such as spanking their butts with a hand stick, putting a graffiti on the back of their panties and lastly taking pictures of them the same way as they did to Yoshikawa. However, her mother arrives to inform their parents about firing Onizuka but is unaware of Anko's bullying actions until Yoshito Kikuchi plays the tape record where Anko and her friends are talking about to bully Yoshikawa when Onizuka gets fired as well as to make her mother as reckless and stupid as they laughed. Knowing of her actions, Mrs. Uehara was horrified to hear this and tries to make a reason for her daughter. Onizuka angrily scolds Anko to grow up when she talks back at her mother not to know about her actions. However, Mrs. Sakurai announces the postpone of Mrs. Uehara's orientation to fire Onizuka and she let him discipline her daughter and her friends.

In later episodes, Anko becomes cold to their teacher when he was framed by Miyabi Aizawa for the embezzlement until in Episodes 37 up to 41 where she and her friends remain hostile to Yoshikawa but she soon gains a crush towards him after he saves her during one of Onizuka's activities in their trip to Okinawa.

Anko is one of the first who tries to get Onizuka fired and actually getting just a few steps away from succeeding in that. When Onizuka finds out that Noboru was bullied by Anko's trio he states that no one should be bullied in school and whoever perform such an act should be bullied. He therefore sets up a plan in order to get revenge for Noboru with Noboru. Anko targeted Noboru a second time (though in the manga she is seen bullying Noboru only once meaning that there is no ruling out that there might have been other occasions in which it occurred) because she had seen him in a good mood since Onizuka took class 3-4 homeroom teacher position and deducing that it was because of him, she beat Noboru, got him undress, took picture of him and made him swear that he would not tag along Onizuka anymore or else his pictures would be distributed throughout the city. Eventually while Anko was celebrating at a karaoke of how they treated Noboru, Onizuka went inside their karaoke room, tied them up and pulled off their skirts and underwear leaving their butts completely naked (in the anime he left their underwear on). Afterwards he wrote apologetic words on their butts and made Kikuchi take pictures of them.

Eventually however, after failing to get Onizuka fired due to Kikuchi and Noboru's hard work she was given a life lesson by Onizuka who told her that she should not incriminate anyone else from herself for what happened. Since then Anko has been giving her verbal support to anyone who wanted to harm Onizuka but has not acted against him. Eventually she gets close enough to Onizuka to offer him a million yen in order to save him from getting fired another time, although he utterly rejects the money.[1]

She is then advised by Onizuka about what she should regarding the feelings that she has for Noboru, and although Anko at first tries to deny them, Onizuka eventually manages to get her to admit that she likes Noboru, this really helped Anko as she was spiritually able to progress since then and develop what she felt for Noboru.

At the beginning of the manga, Anko bullied Noboru non-stop since she viewed him as a weak person and student; this was particularly because Anko hated weak people. Eventually, Eikichi Onizuka found out what was going on and avenged Noboru, allowing the latter to co-operate with him. Anko labelled Noboru a coward as he relied on the homeroom teacher.

However, her attitude toward Noboru dramatically changes during the Okinawa trip. After falling off a cliff, she is saved by Noboru multiple times in an escape from a dangerous cavern. This makes her realize that Noboru might have been something else than the weak boy she always thought he was. When she finally starts to understand that she has feelings for him, she is shocked and tries to deny them as people would laugh at her if they knew she liked Noboru. Thanks to Onizuka's help, however, she is able to cross over this barrier and admit to herself that she is infatuated with the boy, so much that she would be ready to fight for his pride.

The love she feels for Noboru however is puts her into a hard situation, as a girl like her, with her reputation and beauty, would be able to get a cooler and much more attractive boy than Noboru. Her difficulties are noticed when she and Noboru meet her childhood friend Rinka and her boyfriend Mah at a summer festival, who laugh at Noboru for not being at Anko's level. However, Noboru's confidence and strong character allowed them to prove to Rinka and Mah that Noboru is more than what he looks, allowing Anko to finally acknowledge him.

Anko seems to be fairly well respected among the class, due to her reputation and family.

At first, Anko did not seem to really treasure the bond that she shared with her mother. This gave Anko a reason to use her for her own benefits and showing a totally fake side of her, leading her mother to think that is she was a dutiful daughter. 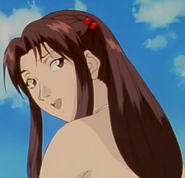 Anko in the Live-Action series